In the contemplative monastic tradition that began to be codified in the 6th century, the two musical prayers  of  the day's end  are both focused on Mary. At  Vespers (usually around sunset or 5 pm) , The Magnificat is sung. This is Mary's great  prophetic response to her cousin Elizabeth which is found in Luke Chapter 1:

“My soul magnifies the Lord,
and my spirit rejoices in God my Savior,
for he has looked with favor on the lowliness of his servant.
Surely, from now on all generations will call me blessed;
for the Mighty One has done great things for me,
and holy is his name.
His mercy is for those who fear him
from generation to generation.
He has shown strength with his arm;
he has scattered the proud in the thoughts of their hearts.
He has brought down the powerful from their thrones,
and lifted up the lowly;
he has filled the hungry with good things,
and sent the rich away empty.
He has helped his servant Israel,
in remembrance of his mercy,
according to the promise he made to our ancestors,
to Abraham and to his descendants forever.”

This call to social justice has been been the basis of innumerable musical masterpieces across the centuries. My favorite settings of  Canticle of Mary ( usually known in music as The Magnificat) include Bach, Vivaldi and Charpentier (see this page for a partial listing of compositions).

During the final week of Advent,  seven responses, or antiphons,  are sung or recited to introduce the canticle of Mary at evening prayer from December 17 to December 23.  These antiphons are based on the prophecies of the Old Testament prophet  Isaiah and refer to the different ancient titles given to the Messiah:

December 18: O Adonai (O Lord)
O Lord, Leader of the House of Israel,
giver of the Law to Moses on Sinai:
come to rescue us with your mighty power!

O Root of Jesse’s stem,
sign of God’s love for all his people:
come to save us without delay!

O Radiant Dawn,
splendor of eternal light, sun of justice:
come and shine on those who dwell in darkness and in the
shadow of death.

O King of all nations and keystone of the Church:
come and save man, whom you formed from the dust!

December 23: O Emmanuel (God with us)

O Emmanuel, our King and Giver of Law:
come to save us, Lord our God!


Of the many  "O antiphons"  that have been written, I commend particularly the following by Hildegard of Bingen:
​O Virtus Sapientae performed by Karen Clark and this Antiphon performed by Catherine Braslavksy and the Seven Magnificat Antiphons of contemporary Estonian composer Arvo Part- listen here. 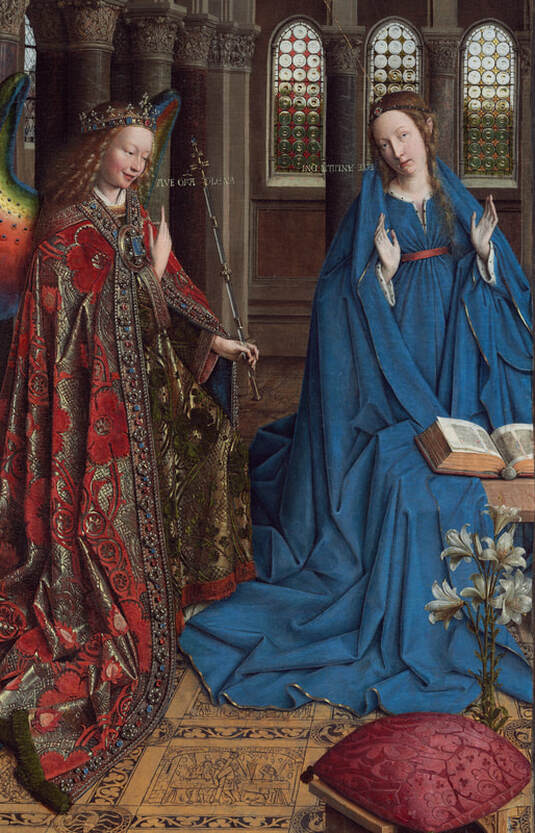 For more on Van Eyck  and the stupendous details of his works, , see this 30 minute video from the museum at Ghent.