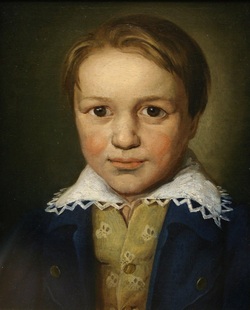 Beethoven 's work has often been classified into three successive periods: the Imitative, the Heroic and the Late ( or Spiritual) styles. In truth, there are often more similarities than differences between these three. In all these periods, we can find  elements of Beethoven's mercurial personality: sudden, jarring changes of mood, explosions of dynamic contrasts, an alternation of terror and tenderness, rage and romance, and a perpetual straining against boundaries.

Ludwig van Beethoven was born on December 16 or 17, 1770 in Bonn, Germany. He was the eldest surviving child of Johann van Beethoven, a court musician and brutal alcoholic singer and his frail and deeply moral wife, Maria Magdalena.

1778: First public performance, billed as a six year old, though really 7 and a half. Beethoven’s father wanted to present him as  a true prodigy, like Mozart. Beethoven was 30 before he discovered his real age.

1784: Beethoven assumes full financial responsibility for his family, including his two younger brothers. Johann, destroyed through his alcoholism, can no longer hold a job, and Beethoven’s mother is ill.

1787: Beethoven is sent to Vienna to audition for Mozart who finds him most promising as a composer. Beethoven’s visit is cut short by his mother’s rapid decline. He returns to nurse her, bury her and grieve.

1792: Beethoven returns to Vienna, but since Mozart has died, he begins composition lessons with Franz Joseph Haydn instead, in a relationship that was fraught with difficulty.

Beethoven’s First Period of composition begins as one of attempting to fitfully imitate and assimilate the Viennese Classical Style: a formal, gracious style based on the Sonata- Allegro form.  With a shifting culture and his own personal challenges, he abandons trying to “fit in” around the age of thirty, when he shatters the rules for both form and behavior.
​
In Beethoven's first published piano sonata (Op. 2 No.1), he offers a four movement work in f minor, giving us something both bigger and darker than all previous Sonatas (with the singular exception of Mozart's K. 457 in c minor).  The work strains at the outer edges of the keyboard and the perpetual use of sforzandi create an atmosphere of imminent eruption.

His Op. 13 in c minor ("Pathetique") is clearly modeled on Mozart: witness not only the parallel harmonic and tempo structure, but the outright homage to (or is that plagiarism of?) Mozart's secondary theme in the slow movement. As both Stravinsky and T.S. Eliot said "Good artists imitate- great artists steal".


Repertoire to compare and contrast:
Haydn: Piano  Sonata in C Major with Beethoven : Piano Sonata Op.2. No.1 in f minor
Mozart: Piano Sonata in c minor and Beethoven: Piano Sonata Op. 13 in c minor, “Pathetique”. Note how Beethoven pays homage to Mozart throughout Op.13, nowhere more obviously than in the Adagio movements, where he literally lifts Mozart's second theme as the starting point for his own poignant musings.