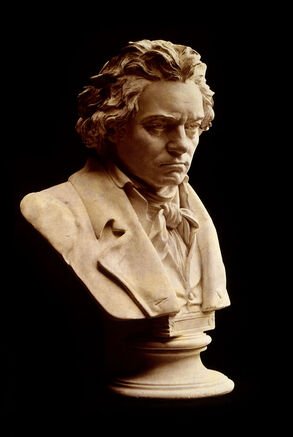 January 21: Beethoven and Mendelssohn
Beethoven's Op. 132 and Schubert's Quartet No. 2  in A minor

February 4: Beethoven, Schumann and Brahms
An ferne die Geliebt and Schumann's Symphony No. 2

February 11: Klimt and  T.S. Eliot
Ode to Joy and the Four Quartets

During the year that marks the 250th anniversary of Ludwig van Beethoven's birth, we celebrate the power of one lone individual to forever change the world. Beginning with a summary of Beethoven's heroic journey from abused child to triumphant piano soloist  and his remarkable resilience in the face of disability and despair, we will explore how Beethoven found  a new musical language to express the extremities of joy and suffering of life  in a way that liberated music and  continues to inspire and transform listeners of all ages, races and religions. We will look at how Beethoven created the archetype of the Musician as Hero and how both his life and his music shaped and defined Schubert, Mendelssohn, Schumann, Liszt, Wagner, Brahms and  was a touchstone and turning point for the painter Gustav Klimt.

Franz Liszt- Hungarian virtuoso whose keyboard technique is still considered unsurpassed by many music historians, his devotion to Beethoven began almost from birth. As an eleven year old child, he was given a "kiss of benediction" by the maestro. For the rest of his life, Liszt would work tirelessly to bring Beethoven's music to the far reaches of the world, as both performer and teacher. He  arranged the symphonies for piano transcription , produced the first Beethoven  festivals and personally financed  the monument that stands  in Bonn, the town of Beethoven's birth- the first statue ever commissioned t o honor a composer.
Johannes Brahms – Musical conservative, loyal friend  and unsung hero- many people (including Robert Schumann) have felt that Brahms was Beethoven's true heir.  His music weds a disciplined mastery of 18th century structure with the depth of emotional expression that was the aim of the 19th century. By turns rousing, energetically infectious, swooning with passion and opening to a state of sublime heart-opening acceptance, almost every one of his 130 published works is a gem. Intermezzo Op. 118 No.2 in A Major  is the music I want played at my own funeral.


Richard Wagner is the most devisive figure of music history: love him or hate him, you cannot ignore him.e.  Though he was one of the most egotistical, amoral and thoroughly repugnant human beings who has ever lived, he exudes a fascination and obsession amongst his fans that is unequaled. He decided to become a composer  and musician at a relatively late age after  of mystical  dimensions.  Beethoven's CHoral Symphony opened his imagination to dream of  a gesamtkunstwerke -  music  that evokes mythological grandeur where the orchestra plays a critical and psychological role in the development of the drama.