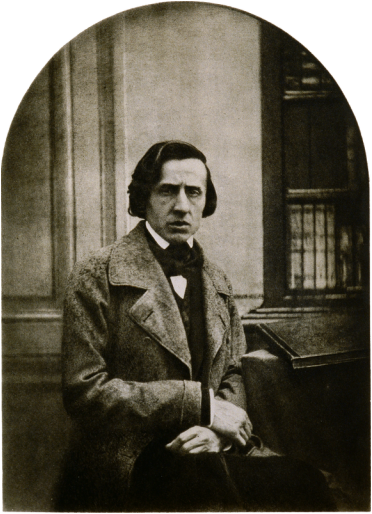 "Simplicity is the highest goal, achievable when you have overcome all difficulties.
After one has played a vast quantity of notes and more notes, it is simplicity that emerges as the crowning reward of art."
- Frederic Chopin on music

Brought up in a genteel environment by a French father and Polish mother, Chopin lived on a palace estate and felt most at ease with affluence and aristocrats. A sensitive and sickly child, he grew up to be a sensitive and more sickly adult. At 98 pounds, he was as thin as a rail, so weak he could not play above a mezzo-forte. His friend Liszt referred to him affectionately as “my dear corpse”.  Chopin had a long and tumultuous affair with the cross-dressing writer George Sand; he succumbed to tuberculosis after years of struggle.

A piano prodigy , everything Chopin wrote featured the piano in a prominent role and most pieces he composed are for the solo piano. He revolutionized ideas about tone color, melody, pedaling, rhythm, line and phrasing. His music strikes a balance between Apollonian elegance and predictability ( he left hand is almost unfailing predictable, solid, steady)  and Dionysian emotional extravagance (wildly soaring and plummeting in both range and dynamics). Chopin was fond of instructing his students to play the left hand “straight” and the right hand “crooked”.

Featured excerpts:
Polonaise in g minor (written at the age of 7)
Piano Concerto in e minor
Nocturnes  in f minor  (Op. 55) and c# minor  (Op. posthumous)
Waltz in A minor
Scherzo in Bb minor
Preludes in e minor and b minor

"I am gay on the outside, especially among my own folk (I count Poles my own); but inside something gnaws at me; some presentiment, anxiety, dreams - or sleeplessness - melancholy, indifference - desire for life, and the next instant, desire for death; some kind of sweet peace, some kind of numbness, absent-mindedness..."