Pilgrimage, Music and the Black Madonna

The extraordinary, almost unearthly mountain range of Montserrat has been dedicated to the Sacred Feminine since early Roman times when it was consecrated to the goddess Venus.

Early Christian legends claim that Saint Luke (patron saint of artists) had carved many statues of the Virgin Mary and one of these was carried by evangelists to  Spain, where it  was venerated by local monks and  hermits. In the 8th century, the image was said to be hidden deep inside of a cave in order to protect it from Saracen invasions, as the creation of sacred images is strictly prohibited in the Koran.

Folk  legend tells that in the year 880 as the sun was setting over Montserrat, some shepherd boys saw a  blazing light shining  down from the sky, accompanied by  celestial music.

The following  Saturday, they returned with their parents, and the vision came to them again.  Eventually the villagers convinced the local bishop to come and the heavenly  music and celestial light led all to a grotto where the  statue. was found. The Bishop suggested that  it be taken to Manresa, but as soon as it was lifted up, it became so heavy that it could not be moved. This was interpreted this as the manifestation of the will of the Mary to stay in that place. The bishop ordered a chapel to Mary to be built and that she be worshipped on the mountain of Montserrat.

In the 11th century, a Benedictine monastery was established on this site which quickly became a center of intellectual, spiritual and artistic life in Catalonia and a revered place of pilgrimage, particularly for seekers of miraculous cures from illness and families seeking the healthy and safe birth of a child. In the 13th century, the story of Montserrat becomes woven with Mary Magdalene and the Cathars and, according to some sources, the inspiration for the Grail Castle which later figured prominently in Wagner's last opera, Parsifal
​ 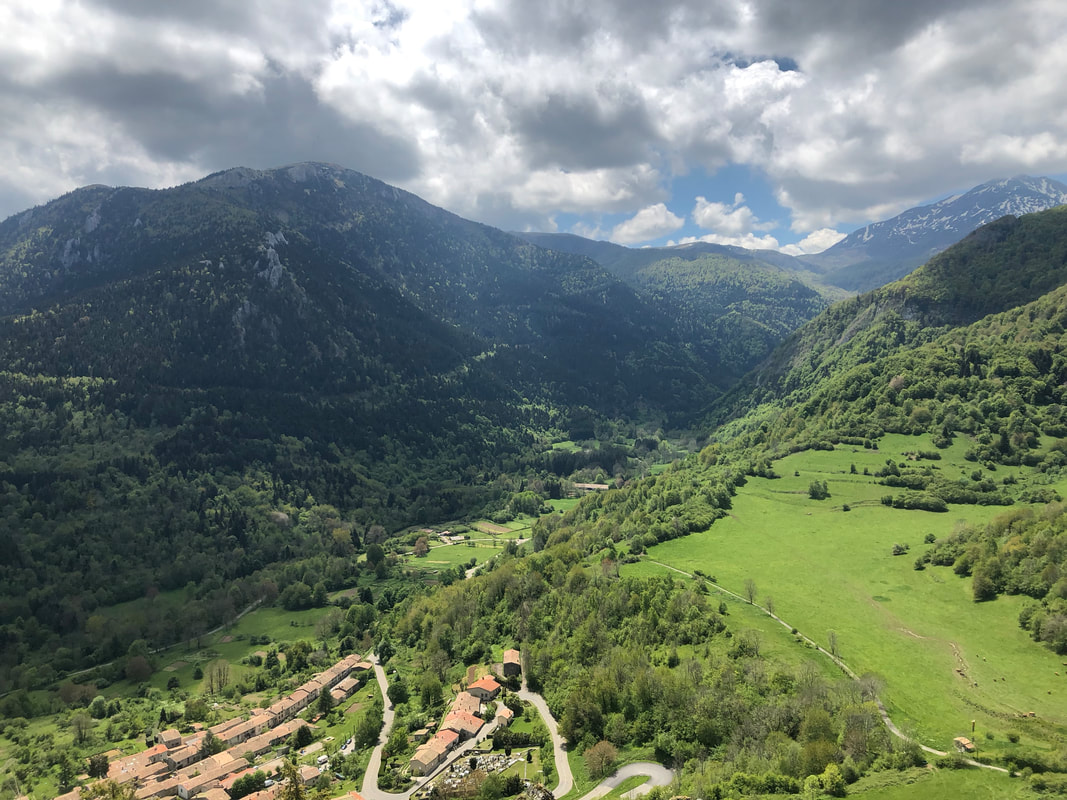 Legends in the Languedoc region of France have persisted for hundreds of years that  in 1244 con the night before the Cathars were burned by Inquisitorial flames of the Albigensian Crusade, a few of them escaped of the mountain of Montsegur, aided and abetted by the monks of the nearby Camon Benedictine Monastery.  Legend claims, they were led to safety across the Pyrenees with a treasure of inestimable value to  a Benedictine monastery in Spain- often claimed to be Montserrat itself. What was the treasure? Some say a priceless book of scripture ( perhaps written by Jesus or Mary Magdalene); others claim it was the chalice used for the Last Supper. The enigma of this mystery has birthed dozens of conspiracy theories and imaginative novels  in the past few decades, from Kathleen McGowan's Expected One to Kate MOss's Labyrinth to Dan Brown's DaVinci Code. Less well known is that this legend is also connected with the Indiana Jones films, as during World War II, a Nazi  commander became  convinced that the Holy Grail had been smuggled for safety to Montserrat.  ( to read  an article on this peculiar piece of history) 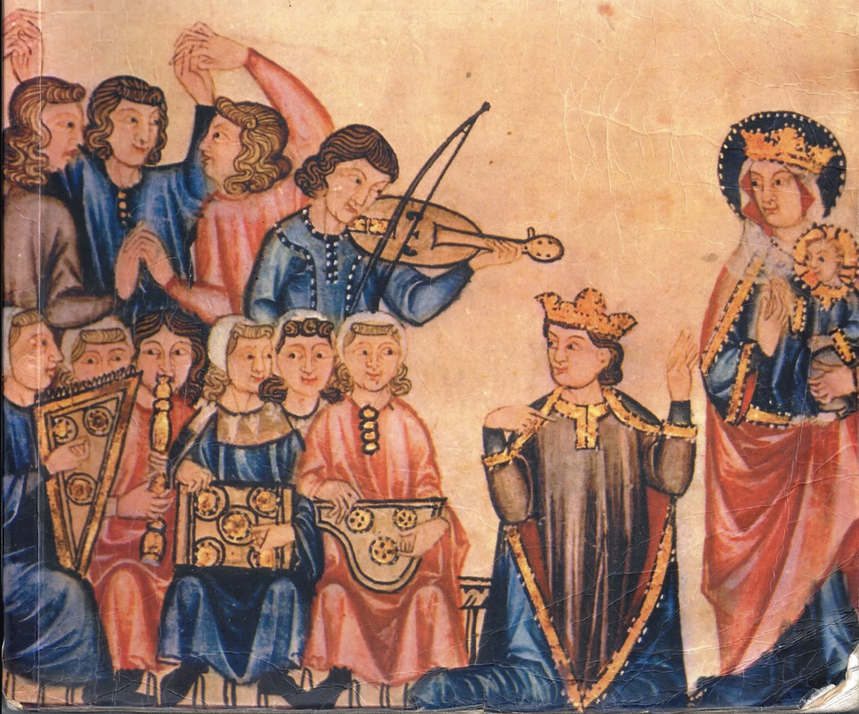 One thing is historically verifiable:  during the extermination of the Cathars in the Albigensian Crusade, the troubadour musicians who had been such a part of Occitanian courts fled for their own safety to the courts of Germany (where they were known as "Minnesingers") and to Spain, where they profoundly shaped the culture, bringing with them songs of love and devotion to the feminine. It was in this world that King Alfonso X  was born  a mere eight years after the conflagration at Montserrat.

Whike he was born and bred for war by his father (a military commander intent on recapturing northern Spain from the Muslims), in his heart he was an intellectual seeker, a poet and a lover  of culture who searched for truth both in the stars and in music.

After a near death experience where he believed he had been healed through the intervention of his prayers to the Virgin Mary, Alfonso sent out his scribes to collect tales of miracles  from those who had gone on pilgrimage. 420 of these he turned into songs which form the extraordinary collection known as Cantigas de Santa Maria.. Grouped mathematically, 9 stories relate miracles, small and large, attributed to the Virgin Mary; every tenth song is a hymn of praise and devotion, many reputed to be written by Alfonso himself.

Though far from perfect in many respects, Alfonso was extraordinary for the way that in his musical court, Jews, Christians and Muslims worked side by side  over 40 years to create this  unique volume. Can you imagine another ruler so dedicated to music, poetry and the feminine that they brought the best minds together despite vast differences in the service of beauty? 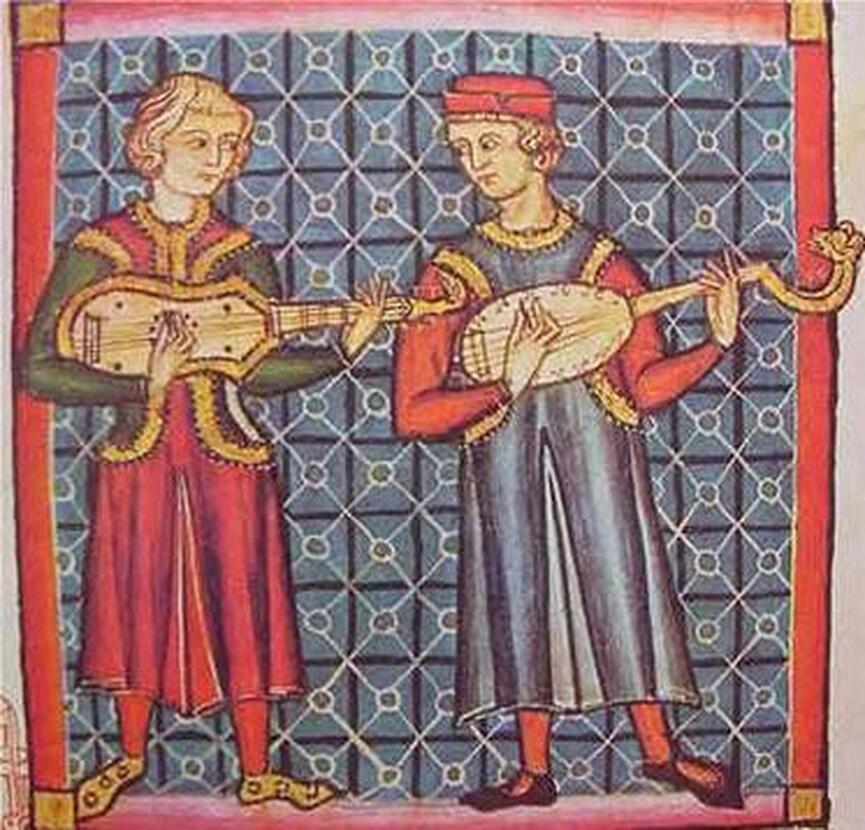 Alfonso is also responsible for making a copy of La Moreneta, the Black Madonna of Montserrat, to reside at the end point of the Camino in Santiago Compostela.

In addition to the Cantigas de Santa Maria, the other extraordinary Medieval collection of music for pilgrimage to Marian shrines is the 14th century  LLibre Vermell or Red Book of Montserrat.  COMprised of ten songs in both  the "sacred" language of Latin and the vernacular languages of  Catalan and Occitan.  The book tell  us that it was created " "Because the pilgrims wish to sing and dance while they keep their watch at night in the church of the Blessed Mary of Montserrat" . Imagine while you listen to them that you are a weary traveller who has journeyed for days or weeks on foot and you have come to spend the night in the sanctuary. Surrounding you are pilgrims from all over Europe, bringing the longing in their hearts for healing, reconciliation and hope. Together, you join hands, sing and dance. What an experience!

In the 19th century, Napoleon bombarded an attacked Montserrat, sacking the renowned  library. Miraculously, the Lllbre Vermell survived because it had been shared for copying to another Benedictine Monastery. There are diverse interpretations of this extraordnary song book, written before music had standardized notation or instructions for instrumentation. Some recordings sound more ethereal or like Gregorian chant; others, draw out a pronounced gypsy character. In truth, the collection bears evidence that both styles were intentionally wed together, with some of the melodies originating from popular folk tunes.  Below are some of my favorite recordings. I encourage you to sample them all and see what best suits your taste.

​
To learn more about Alfonso  X"El Sabio" ("The Wise" or "The Learned"), see the following books:

The Wise King: A Christian Prince, Muslim Spain and the Birth. of the Renaissance by Simon Doubleday


A Vanished World: Muslims, Christians and Jews in Medieval Spain