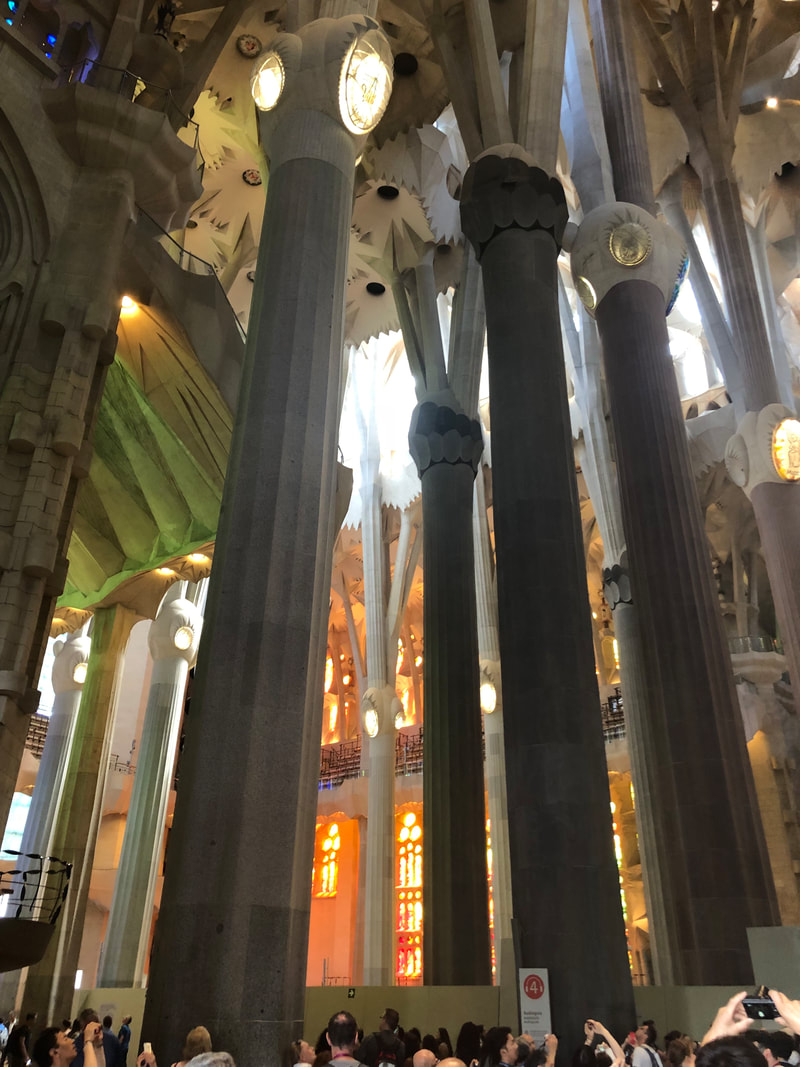 Modernist architect Antoni had a lifelong relationship  with Montsrrat and its Black Virgin. Gaudi would regularly go on retreat to Montserrat, sitting for hours in silence inside the caves and listening to the sounds of the famous boy's choir inside the chapels singing vespers at sunset. During the daylight hours, he would climb to the top of the tallest mountain, studying the flora and fauna before drinking in the vistas that stretch all the way to the Pyrenees. Nature, music, silence and sculpture fused together for him to create a mystical portal and they shaped his visual imagination.Click below to learn more . Watch the video below to get a glimpse of how deeply nature shaped his work.

Commissioned to create a depiction the first  "Glorious Mystery" of the Rosary on the pathEventually, once he moved into Sagrada Familia (in order to spend as much time working on it as possible), he slept on a mattress that is in the crypt, right next to where the Chapel of the Rosary and the Chapel of the Black Madonna now stand. It is fair to say that the last few decades of his life and work were infused with this ancient prayer to the Virgin Mary. "Hail Mary, full of Grace, the Lord is with you" are the opening lines of this Christian mantra, words which also found form in the Portal of the Nativity, the first part of Sagrada Familia which was completed by Gaudi.

Thrice Gaudi was asked to create works for Montserrat Abbey. A lack of fund and civil war got in the way each time. The last project was to depict the "Glorious Mystery" of the  Rosary: the Resurrection on the path to the cave where La Moreneta had been rediscovered in the year 880 . While this project  was fraught with difficulties and not completed by Gaudi himself, while working on it, Gaudi developed the practice of reciting the rosary three times a day. something which planted seeds inside of Gaudi's imagination.  These seeds that sprouted when he was asked to take over the building of a church commissioned by a community dedicated to St. Joseph  in Barcelona that would honor the Holy Family,

It is fair to say that the last few decades of his life and work were infused with the Rosary,  the ancient prayer to the Virgin Mary. "Hail Mary, full of Grace, the Lord is with you" are the opening lines of the rosary. This Christian mantra found form in thee Portal of the Nativity, the first part of Sagrada Familia which was completed by Gaudi.  and depicts the Angel of the Annunciation surrounded by musicians.
​
Sagrada Familia  became the vision  that consumed the second half of Antoni Gaudi's life. The last twenty years, it was the only project he worked on, feverishly laboring to give form to the image that dwelt inside of him. So obsessed was he that he moved a mattress into the lower level of the Cathedral, sleeping in the room that is now  the Chapel of the Rosary.  He would awaken early, pray the rosary and get to work with chisel, hammer, compass, plaster of paris, only stopping to pray the rosary again and eat at noon and evening time.

This majestic monument that now dominates the landscaped of Barcelona and,  described by one art critic as "melting sandcastles", is Gaudi's homage to the peculiar rock formations of his spiritual home. of Montserrat and the Rosary. It is nearing completion after 150 years of construction. To learn more about this  towering masterpiece, .- click here. to watch "God's Architect" a 60 Minutes segment  to learn more about this extraordinary visionary or click on the you tube videos  below on this page. 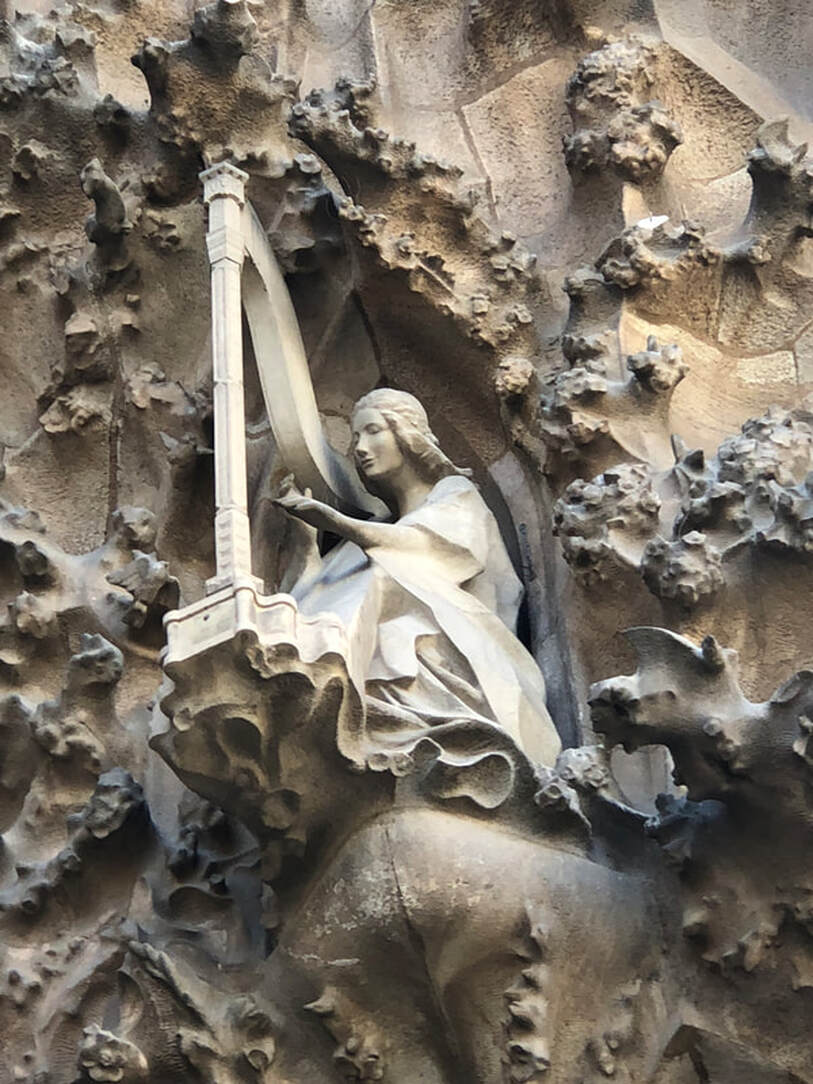 The first completed portion of the cathedral was the Portal of the Nativity. Surrounding the door are carvings of  harpists, violinists and singers making music together as  the Angel Gabriel offers his announcement of the miraculous birth. I wonder if Gaudi sang as he carved, and if the sound of the boys choir from Monsterrat was part of his own inner musical soundtrack. 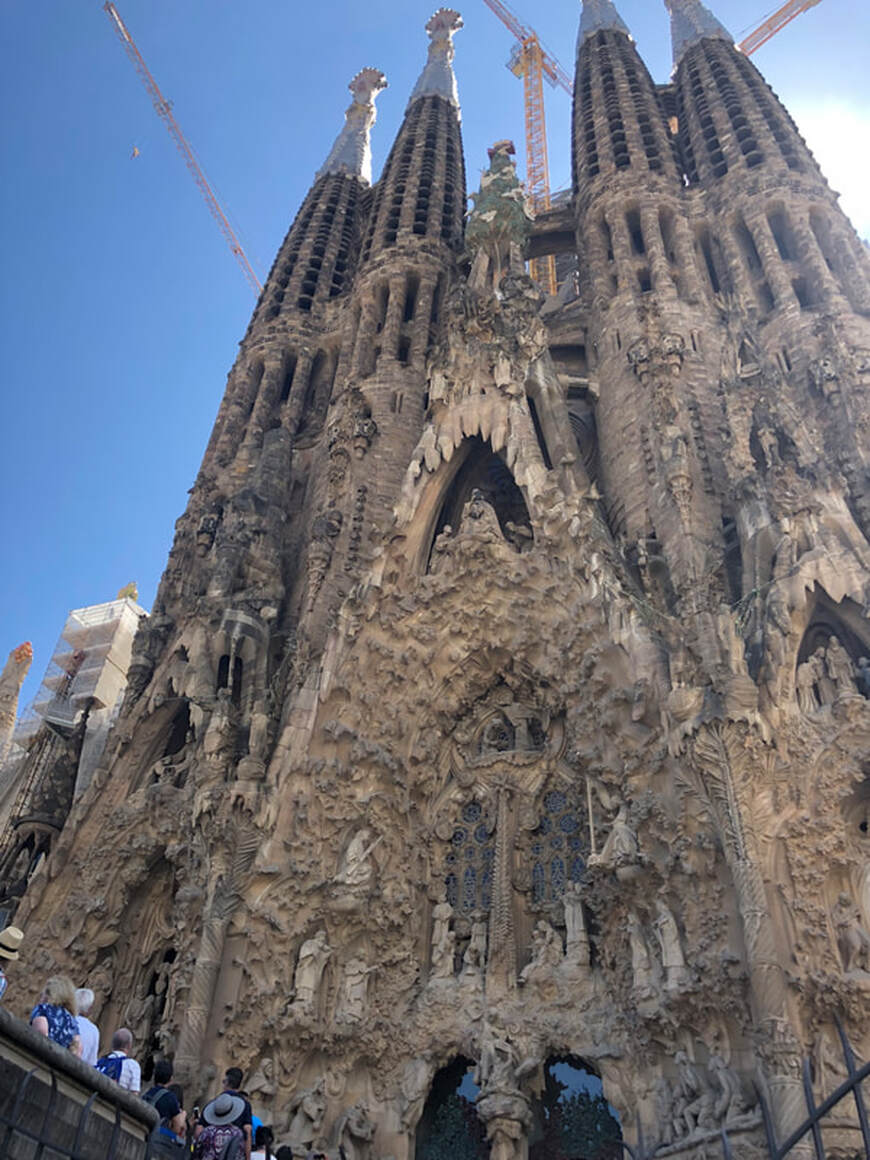 Once inside the  "sand castle" the carvings on the pillars that evoke scallops and starfish and  give a sense of being on the bottom floor of the ocean inside a giant kelp forest.

Visitors marvel at how the colors change with time of day and year, opearating on two seemingly contradictory but complementary calendars. In the  coolness of the morning, blue and green light illumines the pathways, giving way at mid-day to yellow and becoming, with the late afternoon, a blaze of orange and scarlet.  But on the yearly calendar. Gaudi designed the cathedral so that during the  darkest time of year (the Winter Solstice), the sanctuary is flooded primarily with red and orange while at the Summer Solstice, blue and green dominates. This was Gaudi's way of bringing balance to his work: during the coldest time of the year, we would be "warmed" by fiery light, while during the brightness of the summer days, we would be "bathed" by cooling colors.

​150 years in the making, it is scheduled to be completed in 2026, but which time, he may be on his way to sainthood: in 1996, an association was formed to beatify the architect.

​.  Click the video on the left to see Gaudi's aRosary Chapel and the two on the right to watch the play of light

To learn more about the practice of the Rosary (including both traditional Catholic and contemporary spiritual forms of this ancient prayer) , see The Way of the Rose website. Here you will find a plethora of material by our guests Clark Strand and Perdita Finn, including the schedule for  numerous online rosary groups 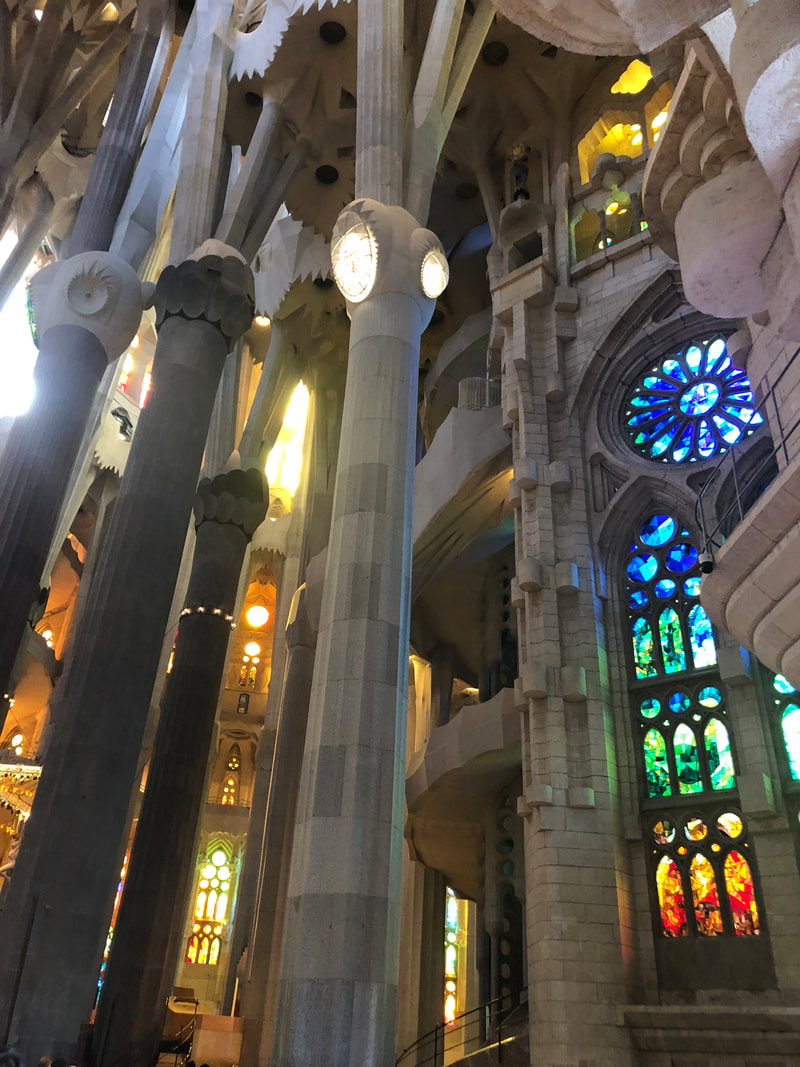