The Albigensian Crusade, Esclarmonde of Foix and Montsegur

d
Legend claims that  after  Jesus’  crucifixion, Mary Magdalene journeyed to the south of France in a rudderless boat,  landing at Saintes Maries de La Mer, where she preached and converted Gaul to Christianity. The form of Christianity that she is alleged to have taught  is thought by some scholars to be more Gnostic , Pythagorean, or Neo-Platonic than the church which coalesced in Rome with the merging of Imperial power, the pagan Sol Invictus cult  (which worshipped a sun God born on December 25) and the teachings of  Saints Peter and Paul. The Church of  Southern France (Occitania) differed from the Church of Rome in several significant ways:

1.      It was a church of equality. Both men and women were preachers and administrators of sacraments.

2.     It was a church of simplicity. Preachers held jobs as well as spiritual authority. Most travelled the country teaching while they supported themselves as weavers.  Communities would gather in homes or in nature; there were no ecclesiastical buildings, vestments  or  relics, nor any tithe. The riches of the world were seen as a distraction and a snare, and hence, leaders were dedicated to lives of poverty.

3.     It was a religion that was personal and symbolic. Like the Occitan language itself, the Christianity which flourished in the Languedoc was poetic rather than literal.  Salvation came from wisdom, which  was to be found in contemplation and meditation on the words of the Gospel of John and through the devotion to the practices of  an ascetic life: fasting and prayer.

4.    It was a religion of non-violence. War and oaths of fealty to a lord were forbidden. The crucifix was viewed as a symbol of torture, and never venerated. Instead, the symbols of the Cathars were light and the dove of peace.

5.     It was a religion of universal salvation. The soul was seen as a Divine Spark which underwent a process of purification on earth through a series of reincarnations until it was reunited with the Divine Source. Hell was thought to exist only on earth; eventually all humans would be saved.

While some elements of the Cathar religion might strike us as peculiar (the creation of matter by a Demiurge, for example), other beliefs have become quite common in the 21st century, such as vegetarianism, pacifism, euthanasia,  and reincarnation. Many tenets of Cathar  faith that were condemned as heretical and punished by death have been adopted  by most Protestant churches:  gender  equality ,  the use of contraception , holding communion as the symbolic (but  not literal) transformation into the blood and body of Jesus,  the adoption of the notion of universal salvation,  and the denial of indulgences and purgatory.  Some  beliefs are now even seen as Orthodox  by the Catholic church itself , such as condemnation of capital punishment, refusal of clergy to serve in war, and reading and preaching scripture in the vernacular language of the congregation.

The followers of this faith in Occitania (that region in France which we now know as Aquitaine, the Dordogne,  the Languedoc and Provence) called themselves simply “Good Christians”. They were dubbed by others  as “Cathars” or “Cathari”, from the Greek word  which means ‘pure” (and from which we get our word “ catharsis”). Even Bernard of Clairvaux, who saw the Cathars as a threat to the Catholic church and advocated their destruction  wrote of them :
... if you question the heretic about his faith, nothing is more Christian; if about his daily converse, nothing more blameless; and what he says he proves by his actions ... As regards his life and conduct, he cheats no one, pushes ahead of no one, does violence to no one. Moreover, his cheeks are pale with fasting; he does not eat the bread of idleness; he labours with his hands and thus makes his living ...

It is a long and complex story how the greed of French kings and Roman popes conspired with fanatical and dogmatic personalities and the crushing humiliation of the knights of theThird Crusade to create what has become known as the Albigensian Crusade (named after the nearby city of Albi)  and  the Medieval Inquisition which it spawned. It began on July 22, 1209 in the town of Beziers, a thriving artistic and mystical center, renowned for its international community of Jewish, Cathar and Catholic scholars working together in an atmosphere of mutual respect. It was a town dedicated to Mary Magdalene, to whom the Cathars traced their spiritual lineage. Papal dispensation and the spoils of war were offered to troops for attacking the region, and  an enormous army   amassed . Surrounding the city, they demanded the delivery of all Cathars. The city refused. The presiding leader of this first attack  was the abbot of Citeaux, who later was named the Archbishop of Narbonne. He ordered the extermination of the entire town, which had taken sanctuary in the church of Mary Magdalene. When soldiers protested that there were Catholics as well as Cathars in the church, the abbot famously replied , “Kill them all. God will know his own”.  20,000 men, women and children were burned alive and slaughtered by sword.  Thus began one of the most savage and brutal campaigns of all time,  of which Will Durant has written in his Age of Faith :

"Compared with the persecution of  heresy in Europe from 1209 to
1492, the persecution of Christians by Romans in the first three centuries  AD was a mild and humane procedure. Making every allowance required of an historian and permitted to a Christian, we must rank the Inquisition, along with the wars and persecution of our time as among the darkest blots on the record of mankind, revealing a ferocity unknown in any beast”

It was not a fair fight. It never is when one side is dedicated to pacifism and non-violence and the other has a vast army of warriors who believe they will be granted  both worldly riches and heavenly salvation for murder. By 1242 when the last of the Cathar communities was burned alive at Montsegur,   the rich and fertile land of Occitania  lay in utter waste. This land of troubadours and poets, a culture which revered the art of courtly love and which granted astonishing equality to women, a land of extraordinary mysticism  where the Kabbalah  had so recently been developed- all was completely destroyed.  Surviving Occitan artists, musicians and scholars were scattered to the protective courts of King Alfonso in Spain and the courts of the Minnesingers in Germany. Numbers are difficult to know for certain, but most often,  the murdered are counted in millions. It was, as some historians note, the first genocide in Europe.

Today, as you drive through these beautiful lands, you can still see the remnants of these atrocities. Roadside markers with the Occitan emblem denote places of particularly large scale violence and death.  “Rue des Martyrs” and “Rue de la Massacre” are not uncommon names for streets. Signs of  “You are entering Cathar country”  punctuate the roads which lead from the gaudy and extravagant papal palace at Avignon to the   rugged, sun kissed mountains  that were the last refuge of the Cathars.


There are very recently signs of  acknowledgment of these atrocities by the Catholic church. In  a gesture of reconciliation, in October of 2016 the Bishop of Pamiers organizes a pilgrimage to Montsegur in which wreaths were laid at the site of the massacre and Occitanian singers offered music passed down from the Cathars.
Read about the event here in this article in  Church Times and in this one by Cathar historian James McDonald

May it be the first of many acts of atonement and acknowledgment  to follow.
As guides to creating rituals that transform trauma , I heartily encourage you to seek out the works of Francis Weller  (especially his  book The Wild Edge of Sorrow) and Thomas Huebl. 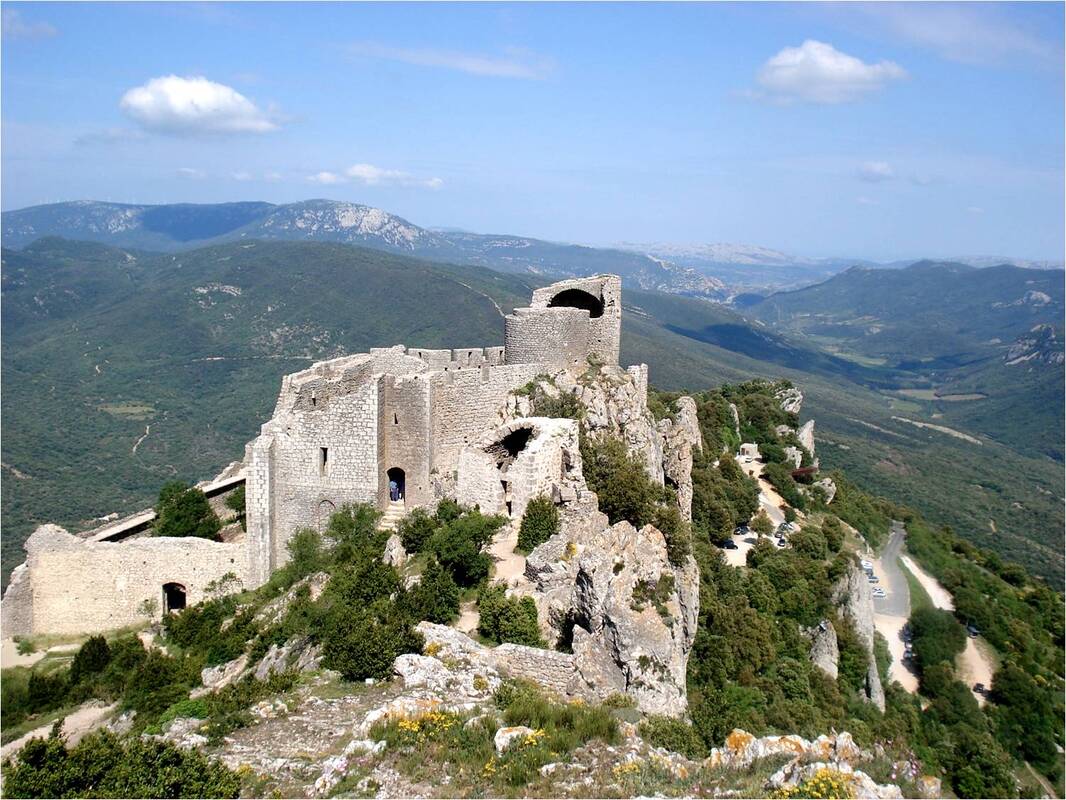 Peyreperteuse, one of the last Cathar Castles
Below are the castles of  Foix and Montsegur, owned by Esclarmonde - one of the greatest heroines of the age . A beautiful and educated  aristocratic woman who had born six children, upon her widowhood she renounced her wealth to adopt the simple life of a spiritual Parfait or leader.  It was the learned Esclarmonde who was chosen to debate the side of the Cathars  against the Church of Rome at the Council of Pamier- her opponent was Dominic de Guzman (founder of the Dominican Order).
Read  the Laconneau essay about her here.
​Read Anne Baring's essay about Esclarmonde and the Cathars here
​ 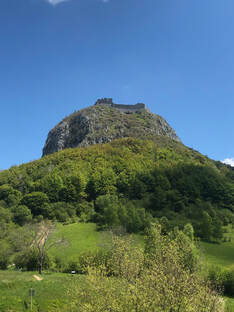 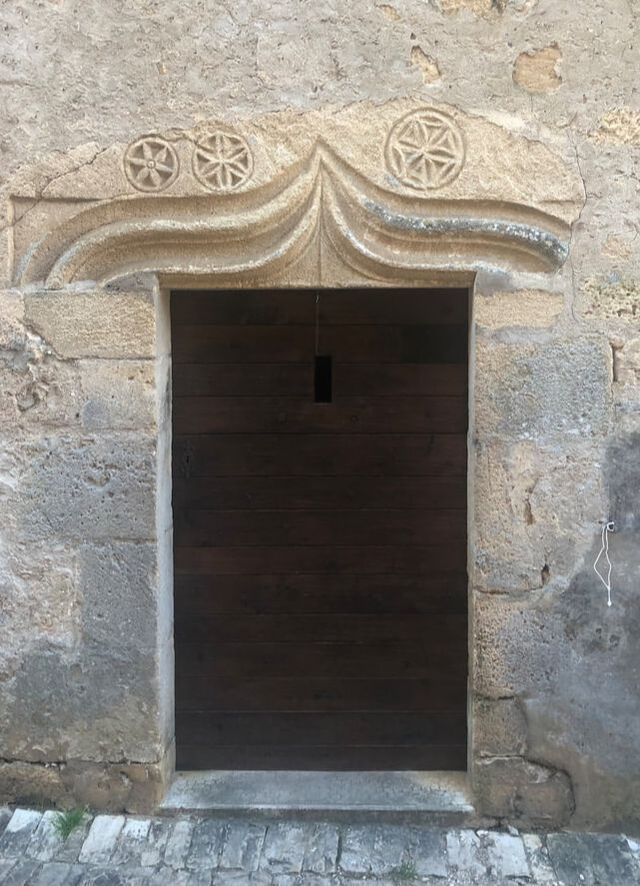 "Sub Rosa": Safe houses  for heretics like this one in Beynac were marked with the sign of the rose

1207 : Esclarmonde of Foix debates at the Council of  Pamiers

July 22, 1209 : Attack at Beziers, France; up to 20,000 put to the sword by the combined forces of the Pope(Not-So) Innocent III, the Cistercians and King Philip Augustus of France. The beginning of the Albigensian Crusade.
Beziers was a town where Catholic Orthodox, Jews and Cathars all lived peaceably side by side. When the besieged town refused to hand over the Cathars,  attacking soldiers asked how to distinguish  between them.the The commandeer in chief, Cistercian Abbot Armaury, infoamousluy replied, "Kill them all. God will sort his own" . 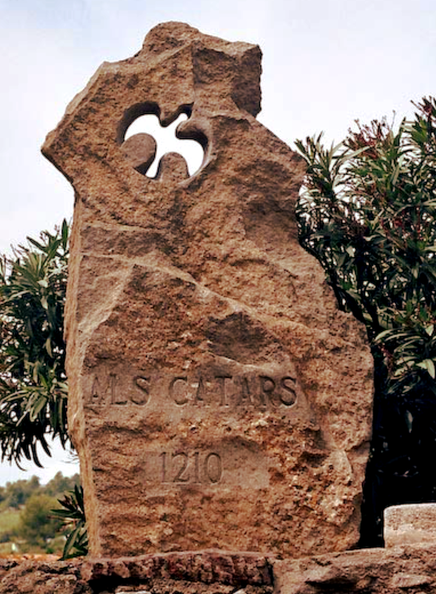 1244 : Fall of Montsegur; flight of Cathars and troubadours to Spain and Germany where they take refuge. Many Cathar men hide in Franciscan monasteries, while the surviving women parfaits take refuge in Benedictine orders.  The Flower of Life becomes a symbol of  secret sanctuary," sub rosa”, under the rose

1296          Spiritual Franciscans declared heretical by Pope Boniface VIII. Watch the film or read the novel In the Name of the Rose written by philosopher and Medieval historian Umberto Eco for a  fictional but well-informed and gripping account of the battles around this issue.

1314        On Friday the 13th,  the Knights Templar and grand master Jacques de Molay are rounded up and burned by order of Philip IV

1326-1329   Meister Eckart brought before Inquisition. He is declared a heretic after his death.

1480          Spanish Inquisition established by Ferdinand and Isabella in Spain. Eating pork becomes grounds for arrest and trial before the Inquisitors ( see the film Goya's Ghosts for a heart rending depiction of how this continued even into the 18th century in Spain) ​To read about  Laconneau,  a community that traces its roots to the Cathars, read here

For further history of the Cathars, including a timeline and source documents from the Inquisition, click here
​Forgiveness Practice:

​I am sorry.
Forgive me.
Thank you.
I love you.