A Short History of the Labyrinth:

Various labyrinth patterns have been found all over the world from Iceland to Mexico, with the earliest European labyrinths possibly dating from  2000 BC. A labyrinth is not a maze. There is only one path. There are no dead ends.  Many cultures have seen in the labyrinth a metaphor for life itself, filled with twists and turns but leading to one end.

The Chartres labyrinth was placed in the  famous Cathedral in France at the dawn of the 13th century. It was a pathway of peace and reconciliation during a time of war and enormous conflict when the horrors of the war in Southern France followed on the heels of the Crusades against Islam  in the Holy Land and during the same period that the Medieval Inquisition was launched. Meanwhile, this beautiful pattern was built as symbol that we are all on one path and that the pursuit of peace will lead to the full flowering of our humanity. Legends tell us that the builders of the cathedral pledged themselves to reconciliation. Before they could pick up a hammer, they had to follow Jesus’s words and first reconcile with the people in their own lives. Eyewitness accounts mention that the workers strapped stones to their backs from the river, carrying them up the hill to the base of the cathedral singing hymns of hope.

​For centuries, Chartres was a place of pilgrimage. Travellers on the road from France to Spain would stop there to use the labyrinth as part of their journey to Santiago Compostela.

During Holy Week at the Cathedral, parishioners would walk the labyrinth on Good Friday in memory of the crucifixion. On Easter, they would join hands, singing and dancing on the labyrinth to celebrate  Christ’s resurrection.

During the French Revolution, the Chartres labyrinth was covered with chairs and fell out of use until Rev. Dr. Lauren Artress and Dean Alan Jones of Grace Cathedral in San Francisco arrived and began to revive the ancient practice of walking the labyrinth. Dr. Artress launched Veriditas, the home of the global labyrinth movement that trains facilitators around the world and hosts yearly pilgrimages to Chartres Cathedral.

Now, there is a broad movement to reclaim this contemplative tool and labyrinths are being placed in schools, hospitals and retreat centers as well as in churches of many different denominations.

Medical research on the effects of  walking the labyrinth on the brain suggest it can enhance creativity, mitigate trauma, alleviate anxiety, reduce stress and even help patients prepare and recover from surgery. It is being used a universal practice to stimulate a deep sense of well being. 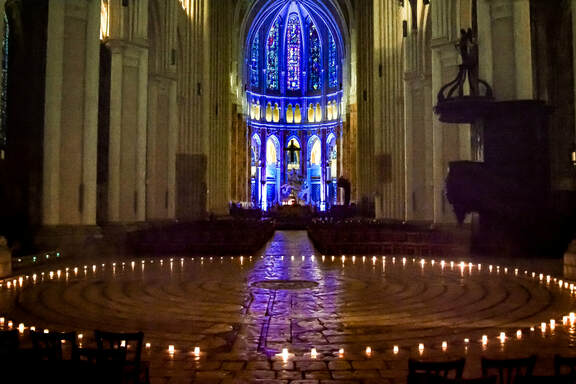 Suggestions for Walking the Labyrinth:

Mindfulness Meditation
With each step, focus on your breath and the sensation of your feet on the path, seeing if you can bring them into a gentle rhythm together.

Praying the Labyrinth
Try a short prayer like, “Make me an instrument of Thy peace”, “Guide Me, Holy Spirit”  or  “I open myself to Thee, Holy One”

Mantra
Some people find the constant repetition of  a prayer . Sometimes the repetition of just one simple word  can be helpful in quieting the mind. Try repeating the Lord’s Prayer or  a word like  “Peace”, “Trust” or “Truth”,

When you arrive in the center, imagine leaving the weight of the mistakes, regrets, fears and worries behind in the center.

On the journey outward, with each step that you take, remember with gratitude a person who has blessed your life with kindness, love, beauty, compassion or wisdom.
​