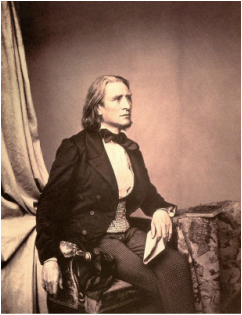 
Franz Liszt (1811-1886)
Perhaps the greatest piano virtuoso of all time- his first published composition was at 11, a variation on a theme by Diabelli.

At 21 in Paris, he heard the violin virtuoso Niccolo Paganini and became determined to do on the piano what the “Devil Incarnate” did on the violin. He made piano transcriptions of  Paganini’s  celebrated Etudes and dedicated them to Clara Schumann. Liszt’s favorite language was French: he never learned Hungarian.

1833- Liszt begqn a scandalous affair with Countess Marie d’Agoult. The countess (who was seven years older than Liszt)  left her husband and children to elope with Liszt. They lived in Lake Como and Switzerland and ultimately had three children. The one surviving child, Cosima, shared her parents’ penchant for scandal. While married to the most prominent conductor of the time, Hans von Bulow, she began an affair with Richard Wagner and illegitimately bore Wagner three children.  Richard Wagner and Liszt were extremely close, dedicating music to one another and creating the “New German School” which becomes the focus of a heated debate about the future of music and spawned the  War of the Romantics- n the other side were Joseph Joachim, Clara Schumann and Johannes Brahms.

He had a passionate 40 year year relationship with  with the homely but brilliant  Russian princess,  Carolyne Von Sayn Wittgenstein, who  was separated from her husband and who shared his fervent devotion to Catholicism. When it proved impossible for her to get an annulment and for them to marry,  Franz and Carolyne were both broken hearted. Liszt entered into the Franciscan Order in Rome where he became an exorcist and music director.

Liszt spent the rest of his days in a three-part life:  monk in Italy, music teacher  in Hungary and concert pianist and philanthropist  in Europe, primarily Italy and France.

As a pianist, perhaps the contemporary Chinese virtuoso Lang-Lang gets closest to embodying Liszt’s charisma and joy in performing- look him up on Youtube playing the Hungarian Rhapsody No. 2