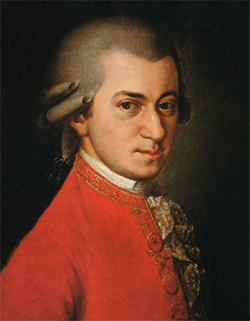 Online course coming soon!
​
A three-week celebration of the life and music of Wolfgang Amadeus, with insights gleaned from archetypal psychology. Each week will explore  Jungian themes as expressed in Mozart's music, featuring live performances by pianists Kayleen Asbo and Elizabeth Walter, mezzo-soprano Bonnie Brooks and violinist Julija Zibrat . $20 per ticket at the door


November 9: The Archetype of the Eternal Child
​For class notes, click here
Mozart's phenomenal abilities as a child prodigy dazzled all of Europe, and he has been estimated to have been one of three greatest savants in the history of the world. Effortlessly mastering mathematics and foreign languages as well as the violin, keyboard  and composition, he toured to royal courts at age 6 and wrote his first opera at age 11. His lifelong capacity for playfulness had a dark side however, and the negative side of the child archetype frequently erupted in fits of pique, temper tantrums, and an inability to manage his worldly affairs. We'll explore both sides of the archetype of the Eternal Child in a program featuring Mozart's earliest and latest music written for the piano, duets he performed with his extraordinarily talented sister Nannerl  and the charming Variations on "Ah! Vous Durai Je Maman"

November 16: Love and Shadows in Opera
​For class notes, click here
Mozart brought a new depth to the world of opera, in particular elevating the female characters to an unknown level of rich characterization. We'll explore how Mozart'sown love life helped him to add added enormous psychological complexity to the operatic stage.  Featuring mezzo-soprano Bonnie Brooks in arias from The Marriage of Figaro and  Don Giovanni.

November 23: Mozart the Alchemist: The Archetype of Hero and Homecoming
Mozart's ability to craft an archetypal quest is present in even his chamber music. Through his violin and piano  sonatas, we'll see how Mozart mirrors Joseph Campbell's description of the Hero's Journey:  Separation,  Encountering the Shadow, Road of Trials, Union and Return.  FInally, we'll find the surprising parallels between Mozart's last opera and  The Wizard of Oz, both works that express esoteric symbolism within the guise of a childlike fairytale. Featuring the Violin and Piano Sonata K.379 with Kayleen Asbo and Julija Zibrat
​