A Beginner's Guide to Bach and Handel
​ 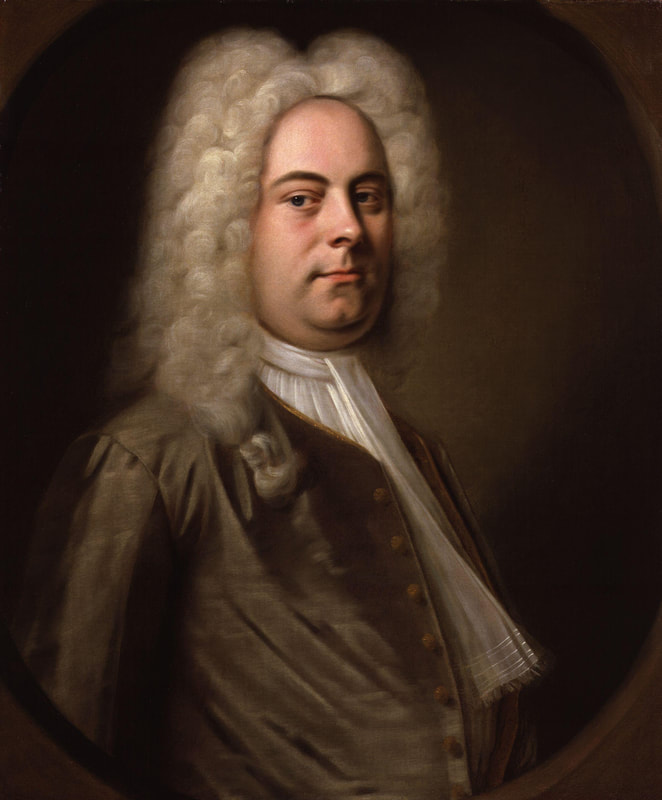 George Frederich Handel (his name is spelled various ways, depending  on which country he was living in) was born in Halle, Germany in 1685 (the same year as Bach and Domenico Scarlatti) and had an extraordinarily vibrant and successful career first in Italy and later in England.
Handel's music falls into four major types:


1. Keyboard Virtuoso
These pieces fall into two categories: flamboyant organ pieces and more intimate suites more likely played on harpsichords in Handel's time, and beautifully rendered on piano in ours. Marvel at Handel's inventiveness with the variation form in both pieces performed by Murray Perahia.
​

2. Secular Vocal Composer (Opera and Secular Oratorios)
Sample the heart rending  "Lascia Cho Pangia" from his first opera, the fairytale like Rinaldo; delight in  Apollo's "Come Rosa Su Spina"  from Apollo e Dafne and let Cleopaatra's arias from Giulio Cesare rip your heart out
​3. Pomp and Circumstance: Music beloved by Royalty
Water Music was commissioned for a float down the Themes by King George I; The  Music for the Royal Fireworks was a major event for George II and the March from  Zadok the Priest has been used  as the coronation music for every British Monarch up to and including Queen Elizabeth II.

4. Sacred Music
The Messiah marks the turning point from secular opera  to sacred oratorio;
the writing of the score was accomplished in a blistering white heat in an astonishing 26 days. Later Handel was to say, he did not whether he was in or out of body when he wrote it--the experience was as if receiving dictation from God himself.
Handel in film
Many of Handel's operas are readily available in filmed versions. Check out the English National Opera. Handel is the subject of Part 2 an excellent BBC biography, The Making of British Music.He also appears as a not entirely likely supporting character in the European film Farinelli. Though the film takes several liberties, it is does do a faithful job of illuminating the strange and decadent world of 18th century as opera companies engaged in bitter rivalry, sought "superstar" castrati and staged flamboyant spectacles. Two scenes are drawn straight from his biography:  where Handel is flees from his creditors and the scene where doves are released into the audience during an aria. 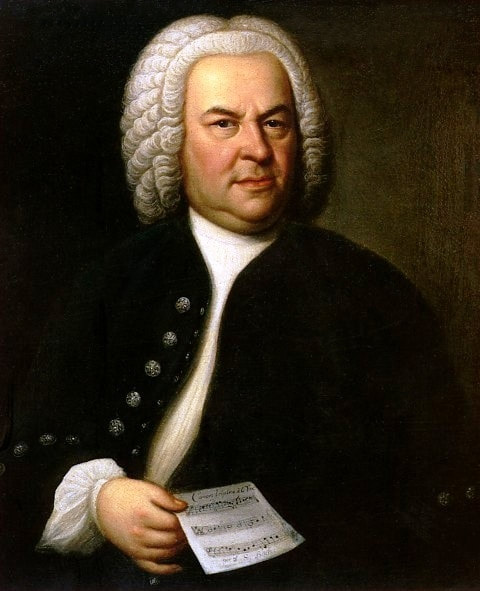 Bach’s compositional output is truly staggering- it has been estimated that it would take a professional copyist over 50 years to just copy all the parts for the 1129 pieces that survive-all of which are being recorded and filmed for watching by the marvelous Netherlands Bach Society.

Truly, a lifetime of joy awaits the listener who is willing to dive into the depths of the man Beethoven called “the ocean” of inspiration. Because of his complexity, however, Bach is often considered impenetrable by the classical music novice. Here is a suggested listener’s list, highlighting the vast array and stylistic breadth.

The Toccata in d minor (above left)  is perhaps the most popularly recognizable of Bach's instrumental pieces and showcases his virtuosic side. Contemporary reports marvelled that Bach's feet flew over the pedals as quickly as his fingers ran over the keyboard .

The Passacaglia and Fugue in c minor (top right) showcases Bach's endless inventiveness within a tight structure: he never departs from the harmonic progression first articulated in the solo bassline. Watch the score to see how this theme is woven throughout all 21 variations, grouped into seven cycles of three ,with each trinity quoting a Chorale hymn by Martin Luther.

The music Bach composed for Prince Leopold of Cothen is dominated by wonderfully intimate instrumental and chamber music works showcasing the fine musical abilities of the court musicians (including Leopold himself, who played the cello!). Imagine this performed in a sumptuous but small concert hall, the focus of the evening's entertainment. Bach's exploration of each of the capacities of various instruments was unprecedented and has yet to be equalled: the Chaconne, written int the depths of grief after the death of his first wife, was thought to be so technically demanding that it was considered unplayable for one hundred years.
The French Suite in G major , a collection of six dances in the sunny key symbolic of harmony and felicity, was written as a wedding present for his  second wife, Anna Magdalena. It begins with a tender and lyrical Allemande and end with a joyous, exuberant Gigue: the Bachs loved dancing second only to making music.

The Brandenburg Concertos survive as a failed job application. Bach submitted these six works, scored for a diverse array of instruments, as a way of showcasing his finest work. Not only did he not get the job for the Margrave of Brandenburg: it is likely that they were never even performed.
Each has its marvels and charms: my favorite is the glorious No. 6 in Bb Major, with its exuberant finale. Led by the violas, it also features the viol da gamba, an instrument that fell out of favor after the Baroque era.

Bach eventually found new employment as the Cantor in Leipzig, a post that required him to serve as composer, organist, choir master and dorm parent for two churches and a boys school in a highly intellectual and religious town. He was the fourth choice for this position and a town council member wrote, "Since the best man could not be had for the job, we must content ourselves with a mediocrity". The first years of this post were dedicated to writing a cycle of  300 sacred cantatas, 15-25 minute musical dramas that illustrated the Biblical themes and scriptures that formed the readings for the Sunday servings. Each cantata is comprised of both solo arias and choral music, with highly embellished and ornate orchestral accompaniment. My personal favorite is BWV 1`47, Herz un Mund un Tat un Leben. The final movement of this beautiful, joyous work that derives its text from the Visitation of  the Virgin Mary to Elizabeth found in the Gospel of Luke is the lilting chorale that has come to be known as Jesu, Joy of Man's Desiring.

The triple crown of choral music are the surviving two Passions and the Mass in b minor. The later is thought to be another failed job application, as Bach's thirty year tenure at Leipzig was anything but satisfying and he was never appreciated.

I cannot urge you enough to purchase and watch the staged productions by the Berlin Philharmonic of both of the Passions: St. John and St. Matthew, composed as the pinnacle of devotion for Holy Week and considered by many musicians ( including Felix Mendelssohn) to be the most astonishing music ever composed. Lear more and see a preview here.

After Bach had completed a five year cycle of cantatas, he began to explore  creating  works that take a form  to the furthest expression.
The Goldberg Variations, the Well Tempered Clavier  Book Two (famously described as the "Old Testament" of keyboard literature  and The Art of Fugue all are veritable encylopedias of form and emotion, worthy (and demanding!) of a lifetime's study. There are so many different  interpretations of these works ranging from the brilliant and eccentric (Glenn Gould) to the reserved and intellectual (Andras Schiff) to the warm and  highly emotional (Angela Hewitt) and surprisingly restrained (Keith Jarrett!) . My personal favorite pianistic interpreter is Murray Perahia, a pianist whose balance of head and heart is exquisite. Because there are no youtube videos of his performance of the entire Goldbergs, I have included one by another pianist that includes the visual dimension of the score to follow. You can also see a video of Angela Hewitt performing this work in the very church where Bach worked in Leipzig here

On the other hand, Bach as an entrepreneur shows his popular and very accessible side. The playful Coffee Cantata and infectious  Concerto for Four Harpsichords  were both pieces that Bach performed with his family at Zimmerman's Coffeehouse as part of a musical series he created called Collegium Musicum.
Finally, to glimpse the incredible impact Bach has had on musicians , watch Bach and Friends. This documentary features not only stellar classical musicians like HIiary Harn, but also musicians of all genres likenBela Fleck, Chris Thiele and Bobby McFerrin, sharing their love and admiration for this musical saint. You can see a trailer for this marvelous film  here.