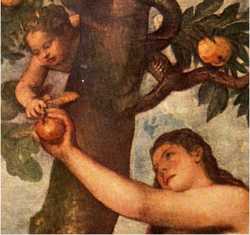 Perhaps no story has done so much damage to humanity as the tale of Eve and the apple in Eden. Beginning in the 4th century, this Biblical tale was used as the basis of the theory of Original Sin, a doctrine that had horrific consequences for women across all the centuries since. It came as a shock to scholars to discover in 1945 a treasure trove of very early Christian documents in Egypt which regard Eve not as the first sinner, but as the first saint: the “mother of all” whose desire for increased consciousness and wisdom led to an evolutionary awakening for humanity.
In this one-day workshop, we’ll explore this other perspective of Eve, and consider the story of Genesis in light of both the various early Christian interpretations and the empowering perspectives offered by both comparative mythological traditions and modern Neuroscience. In the afternoon, we’ll claim our own fruit of knowledge through a painting and ritual process guided by the celebrated artist Sue Ellen Parkinson