GardenDante and Virgil arrive at the base of Mount Purgatory on Easter morning. A boat of souls arrives and the strains of the psalm, In exito Isreal  is sung. Now that Virgil and Dante have come out of Hell,  the world is right side up (mirroring the inversion of Christ’s Beatitudes, which will form a pivotal part of the journey through Purgatory). Everything from Hell is now backwards- what was last is first, what was first, is last. As the pilgrims progress, they meet examples of both vice and its corrective virtue. The Virgin Mary, as Queen of all virtues, is the example par excellence of each virtue, but Jewish figures from the Bible and real historical personages also serve as role models for virtue. Every circle of Purgatory has its own song that the souls sing in order to help cleanse them of their faults. 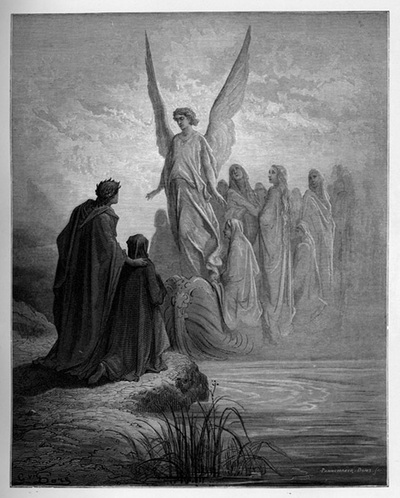