The River Styx  and the City of Dis serve as dividers between the "hot sins" of passion and the far more treacherous sins of cold-heartedness. In Lower Hell, Dante encounters these levels:

Circle 7:  Violence and Blasphemy- Guarded by the Minotaur, the violent are immersed in a river of boiling blood, while blasphemers lie on burning sands

Circle 8: Fraud- panderers and pimps march in lines whipped by demons; flatters are steeped in human excrement; simonists are placed face first in holes with burning soles at their feet (Pope Nicholas III has the largest flames of all); sorcerers and astrologers have their heads placed on backwards; corrupt politicians are immersed in boiling pitch (sticky deeds); hypocrites walk in lead lined cloaks; thieves bitten by snakes and lizards, and lose their own identity and shape; schismatics have their body parts separated as they themselves caused separation (included here are Mohammed and Bertran de Born, who carries his head in his hands); finally falsifiers and counterfeiters are inflicted with various diseases. The multiplicity here suggests how very many ways there are that we deceive others- and ourselves.

Circle 9:  Treason- ringed by giants, who are symbols of pride. Encased in ice in the very lowest circle  are Cain, Mordred, Count Ugolino,  and finally Lucifer (Satan) gnawing on Brutus, Cassius and  Judas


For a contemporary comedic commentary on these lower circles of Hell, see this article which appeared in the Paris Review as an internal "letter" from the Vatican.

Recommended Resources:
Discussing Dante’s Divine Comedy by Dai Dud, Li Tiezi, Zhang An is a modern rendering of the saints and sinners Dante might include if he were writing today. You can see the painting )with notes as to who's who) by clicking on the link below:
http://www.dailymail.co.uk/news/article-1162771/The-Internet-sensation-dinner-party-painting-103-historical-guests--spot.html

The Sultans of Sand created an absolutely stunning representation of Dante's Divine Comedy in Venice in  the summer of 2009. Folllow this link and be amazed: http://www.sultansofsand.com/_1dc_photos.html

"Scenes of Hell" and "Inferno" are but two of the poems by American Poet Laureate  Billy Collins
that reference Dante. 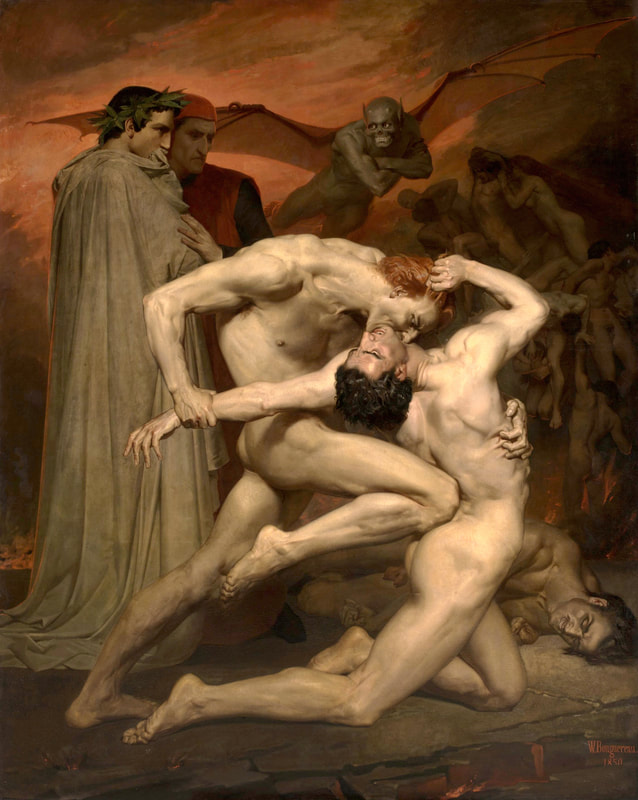