Join celebrated cultural historian Kayleen Asbo, Ph.D  for a three week Summer Academy of Myth, Music and Art exploring the theme of Men Behaving Badly. Come for the morning session on Mozart's opera, enjoy lunch in charming downtown Petaluma and the savor the visual delights of an afternoon series  on Rodin's sculptures,

The three Mozart-Da Ponte Operas are considered masterpieces of operatic literature; witty, fully human, with marvelous characters and unforgettable melodies. The "behind-the-scenes-" story of their creation is every bit as dramatic as the action on stage--including a consultation with Casanova himself!

Musical guests Amy White, Bonnie Brooks and Jason Byer will bring Mozart't magnificent arias and duets to life
This series is recommended to deepen the experience for the San Francisco Opera's summer production of Don Giovanni.

Rodin: Scandals in Stone
Afternoons: 1:30-3:00
To celebrate Rodin ‘s centenary, we'll explore the dramatic story of his life.  Born in poverty, Rodin struggled well into midlife and his life was marked by continual love scandals.  His style--raw and  emotionally real-- flew in the face of the quest for surface prettiness of his time and are now hailed as a turning point in 20th century art. We'll trace the profound impact of both Dante and Michelangelo on shaping the imagination of the mature Rodin as he sought to sculpt in stone works that gave expression to the depth of human passion and despair.

June 5: Rodin’s Early Years and Michelangelo's Influence
June 12: Love, Lust and The Gates of Hell
June 19: Sacrifice and Surrender: The Burghers of Calais

Series Special : Enroll in all six classes by June 1  for $120
Drop-in single classes (morning or afternoon) available on a limited basis, $30 per class
Purchase entire series at the Early Bird rate through the paypal button below or send check
for $120.00 to Mythica at PO Box 2897, Petaluma CA 94953 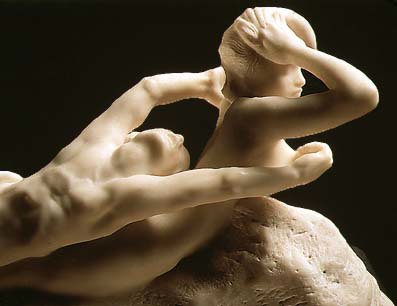