colorful
​" The privilege of aa long life is to become who you truly are, "wrote Carl Jung in his eighties. The great founder of Depth Psychology believed that the pathway to psychological fulfillment, whaat he called individuation, was a radically particular journey that involved shedding the expectation of society to  claim the essential truth of one's own being. For  both Carl  Jung and his wife Emma, this involved wrestling for thirty plus years with a menage a trois  relationship with Carl's former patient Toni Wolff.  To outside eyes, Jung lived a fractured existence: one part steeped in the "ordinary" world of work and family, and the other, living in a world of dreams in his Bollingen tower on the shores of Lake Zurich where he journaled, carved stones and  created art that brought him in resonance with both nature and  more ancient times .

We see some of these same patterns in Gustav Klimt's latter years, where he flourished in an unconventional union with Emilie Floge. His art fused with her colorful dress designs to empower women, liberating them from the constriction of the corset while revealing the radical individuality and fierce intelligence of the models who were their mutual friends and patrons.
​
Every summer, they would vacation with their extended family on the shores of Lake Attersee. The photos reveal a playfulness and joy in their connection, with both Emilie and Klimt wearing loose flowing smocks which Emilie sewed.  Klimt died with her name on his lips and willed half of his estate to his muse ,making her the  custodian of his art.
Was the relationship sexual? There is no conclusive evidence.  In the 300 surviving  postcards Klimt wrote to Emilie when he was traveling, the content is warm and close, but without any erotic content. And yet, many art historians believe that  The Kiss is  Klimt's  portrait of the two of them as  Ariadne and Dionysus in nuptial  union.

Both Jung and Klimt turned toward Ancient  religion for inspiration in their later years.  Jung dove into the study of Alchemy and Gnosticism, seeing in the strange symbols he discovered mirrors of psychological processes. HIs last works include Answer to Job and Psychology and Religion.  Klimt's Stoclet Frieze  was inspired by  Ancient Egypt and his last painting was of Eve awakening- a parallel to the Gnostic texts of Sophia that inspired JUng. 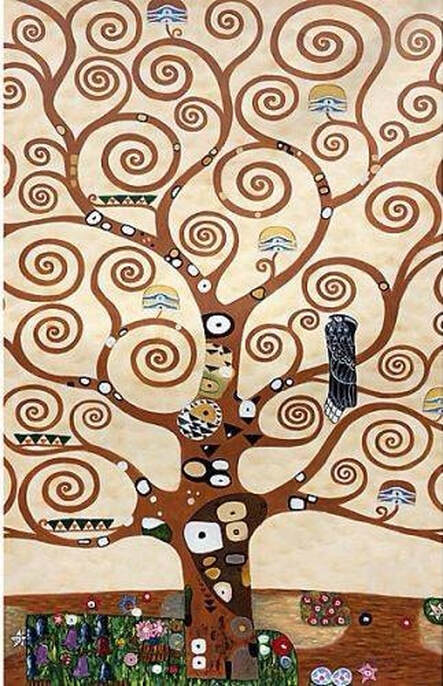