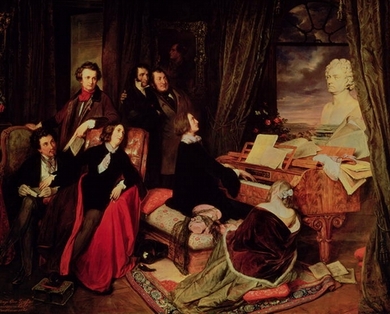 Franz Liszt- Hungarian virtuoso whose keyboard technique is still considered unsurpassed by many music historians. His famboyant piano concerto Totentanz (Dance of Death) is a shameless over- the -top exploitation of the technical marvels of the piano based on the Dies Irae. This piece celebrates the demonic, the macabre, the outrageous and the lewd: it is the equivalent (I  only imagine!) of binge drinking in Las Vegas on Halloween during a convention of Satanists. No wonder at the end of his life,  Liszt felt the need to become a Franciscan tertiary and exorcist.
Hector Berlioz- Besotted stalker and musical revolutionary. His Symphonie Fantastique is one of the world's greatest examples of what to do with unrequited love: go to Italy and create a masterpiece.

Richard Wagner is the most divisive figure of music history: love him or hate him, you cannot ignore him. His gesamtkunstwerke music dramas ( he hated the word opera) brought a whole new array of psychological understanding, mythological grandeur and music expression to the stage.  Though he was one of the most egotistical, amoral and thoroughly repugnant human beings who has ever lived, he exudes a fascination and obsession amongst his fans that is unequaled. Tristan und Isolde is the ultimate expression of the interweaving of myth, love, obsession and death that defined the Romantic Era, and paved a whole new direction for the fragmentation of traditional harmony which was to follow.

This clip below  from the film Impromptu captures the wild excesses of emotion that the Romantic era was prone to. Here, poor Hugh Grant struggles with a Polish accent in his portrayal of Chopin while Judy Davis as writer George Sand passionately pursues him.