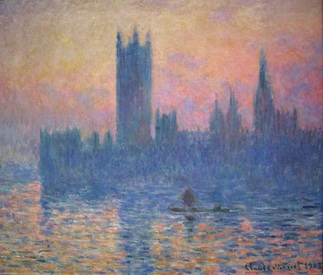 Claude Debussy (1862-1918, French)
While he preferred to be called a “symbolist”, Debussy is usually  labeled  an Impressionist. Like Monet, he was deeply affected by  his introduction to Asian music and art at the World's Fair. In particular, the pentatonic mode and whole tone scales opened up new sound possibilities.For many listeners,  his music evokes the same sense of beauty, light and harmony that are present in the paintings of Monet.
Reflets dans L’eau (Reflection in the Water), La fille aux chevaux de lin (The Girl with the Flaxen Hair ) and La Cathedrale Engloutie (The Sunken Cathedral ) are all examples of this shift of  harmonic language,  Perhaps his most celebrated work, which caused a scandal at its premiere in 1912 is the Prelude to the Afternoon of a Faun . Nijinsky had choreographed this languid orchestral work to depict a faun being, well, faunlike. Apparently this involved an act of simulated indecency at the end. 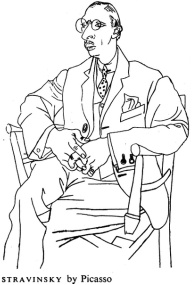 Even more scandalous was the Ballet Russe's production of Igor Stravinsky's Le Sacre du Printemps (“Rite of Spring” or "Scenes from Pagan Russia"). This caused a literal riot in 1913 as audience members came to the theater armed with ripe tomatoes. The opera composer Puccini attended a later performance and wrote that it was "the work of a madman. The public hissed, laughed – and applauded". Called by many the most singularly important work of the 20th century, it is the absolute evocation of Dionysus: the plot centers around a pagan rite of a virgin sacrifice in the wilds of prehistoric Russia. The music is dissonant and rhythmically complex, at times with every measure shifting meters in unexpected ways.  The feeling is raw, primal, powerful. 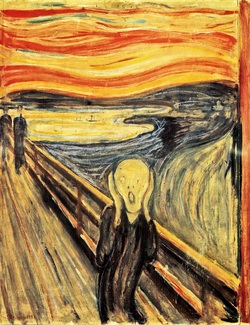 In high contrast to the serene beauty and elegance of the French Impressionist composers (Debussy, Satie and Ravel) is the German Expressionist School of Arnold Schoenberg, Alban Berg and Anton Webern. Spurning all traditional elements of harmony and musical convention, the Expressionists were after a kind of raw, primal truth that can be found in paintings of this time like Munch's The Scream.
Schoenberg began first by abolishing conventional keys altogether in a search for atonality. His Pierrot Lunaire depicts a nightmarish world of ambiguity and the terrors of the unconscious, mirrored by the lack of a key center or harmonic home base. His later experimentations led him to develop twelve tone serialism, a process where  tone rows  (created scales) are constructed of all twelve notes in a fixed order.  Like  the economic principles of communism which developed almost simultaneously, every note must be given the same weight. Once played, an "A" cannot be played again until every other note in the row has had its own allotment of attention. For variety, the row can be played upside down or backwards,  or backwards AND upside down, but never in part. Once a row has begun, it must be completed. Such music is in fact, quite mathematical, and can feel a bit like  Suduko with its quest for logical patterning.

After the radical experimentation of  Arnold Schoenberg , John Cage and others, classical music has returned once again to a desire for  beautiful melodies and clear harmony. Much modern music embraces once more a love of sensuous, lyrical beauty or a stark sense of simplicity. Many contemporary composers have cast a backwards glance, finding renewed inspiration in Medieval chant and 14th century French folk melodies. Below are video clips of the music of two of my favorite composers. The  American Morten Lauridsen's O Magnus Mysterium is one of the most gorgeous offerings  of mystical awe of any time, while  Estonian composer Arvo Part's Spiegel im Spiegel (Mirror or Mirrors) is a beautiful expression of TS Eliot's lines, " A condition of complete simplicity, costing not less than everything".