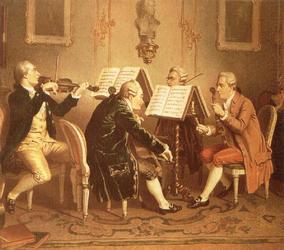 Economically, composers are primarily under the patronage of wealthy aristocrats, who often regard them as servants (Mozart, for example, had to eat in the kitchen with the maids and butlers). Beethoven was the first non opera composer to make a decent living as a free lance musician.

Sonata -Allegro Form
An abstract musical form in which a very clear, logical architectural plan is laid out in three chapters. This form is the foundation for almost all first movements of  Classical music instrumental and chamber music pieces, including symphonies, trios, quartets, concerti and sonatas themselves.

Exposition:
Theme 1 is in the TONIC (home) key (usually in this period, Major)- typically bright and extroverted
Theme 2 is in a contrasting key (usually the DOMINANT or relative minor), more lyrical and tender

Development:
These two themes begin to develop a rising sense of conflict- sometimes, even a heroic battle! Brief fragments of the theme are played without a clear sense of key. Ultimately, the TONIC triumphs.

Recapitulation:
Both themes are restated in their entirety. This time, however, Theme 2 has changed to conform to the TONIC (home) key. Often a brief coda (or in Beethoven's case, not so brief!) extends the sense that the TONIC has emphatically won the day.

Great Composers of this Era:
Franz Joseph ("Papa") Haydn: father of the string quartet- a model of Apollonian moderation
Wolfgang Amadeus Mozart: Child prodigy and tragic man who
Ludwig van Beethoven: Rebel with a Cause, the Uber Hero of later generations who insisted that music be both a personal statement of the individual soul and a means of binding together humanity through catharsis and celebration, thus re-awakening the Ancient Greek ideal of music as medicine, ritual and healing


Recommended Films
"Amadeus", while turning Mozart into more of a cartoon character than he really was, nonetheless does a wonderful  job of creating the feeling of 18th century Vienna and the battles the young composer faced in establishing himself in a world prone to the trivial and subject to political machinations and aristocratic whims.  The set designs and costumes are really magnificent, while the scenes of Mozart's compositional process create a thrilling sense of inspiration. Below is the painfully funny scene of Emperor Joseph II's critique of Mozart's opera Abduction from the Seraglio- based on a real event. For more on this topic, see my blog entry "Mozart , Magdalene and Fake News"
"Immortal Beloved"
Below is the poignant scene where Gary Oldman as the increasingly deaf Beethoven leans his head on top of the piano to hear the sound vibrations while he plays the "Moonlight" Sonata.
The next scene, also from " Immortal Beloved", captures beautifully how the Ninth Symphony really was the  vehicle by which Beethoven came to terms with his life . It was  music  alone that enabled him to endure a brutally abusive childhood and a radically lonely adulthood, connecting him to the universal and eternal.
For a detailed analysis of the Ninth symphony , listen to my pre-concert lecture for the Santa Rosa symphony here.
Below is a graphic representation of one of Beethoven's most profound works, the slow movement from his String Quartet in A minor, Op. 132.  This is one of the clearest examples of music not as entertainment, but as healing and salvation. Written after a near death experience when Beethoven was utterly deaf, it weaves together three sections of music written in the Lydian mode (an Ancient Greek mode associated with healing) with a brighter major key section signifying "renewed life".