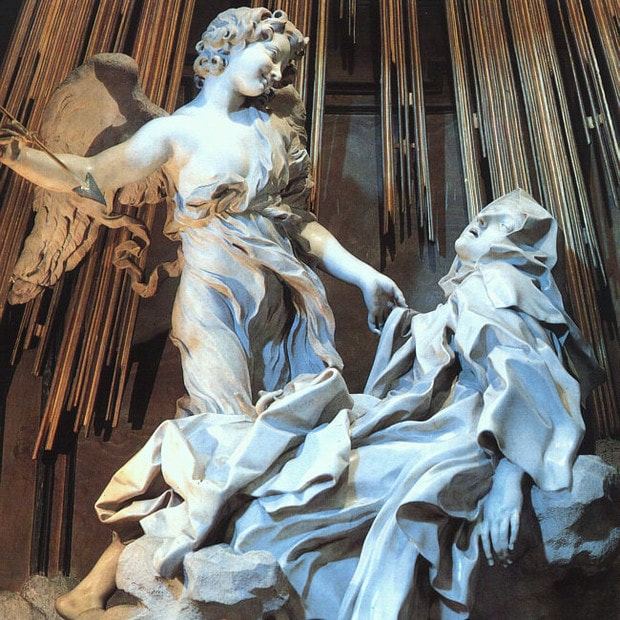 Caravaggio  Young Bacchus
Bernini Ecstasy of St. Teresa, Apollo and Dafne
Chiaroscuro- interplay of light and shadow
Rise of the Harpsichord and orchestra
The Baroque is an era of intricate balance between the "Apollonian" virtues of clarity, order, structure and elegance and the "Dionysian" ideals of intense emotionalism and wild spirit
Prelude- improvisatory, “unbuttoned”
Fugue, Chaconne, Passacaglia- extremely structured forms


Great Baroque Composers
Jean Baptiste Lully, court composer for Louis XIV at Versailles
Antonio Vivaldi: Four Seasons- "Autumn"
George Frederick Handel:
Apollo and Dafne: Come Rosa - an aria that depicts Apollo's unsuccessful attempt to woo Dafne. She decides she would rather be a tree than the girlfriend of the God of the Sun.
Composed  with the hallmarks of apollonian music: in a major key, light, melodic charming and in a moderate tempo. dominated by string instruments.  Notice the symmetrical structure:
A (Major key): B (minor key): A (Major key), what is known as "rounded binary".


Contrast that with Handel's treatment of the myth of  the death of Dionysus (second) mother, Semele
Semele: Ah me! Too late!  This is  slow, tragic,  wildly unpredictable music in a minor key with many starts and stops and surprises, Music of utter pathos and heartbreak


J.S. Bach:  Alas, given the constraints of time, we will only be able to give a passing glance to the greatest composer of all time, a many who utterly represents the Orphic path of integrating head and heart, freedom and structure. His  Well Tempered Clavier  offers  proof of this balance as each volume consists of 24 Preludes (works in the spirit of improvisation) followed by 24 Fugues ( which adhere to rigid rules and constraints)  in  each and every major and minor key.


Below is a video of the extraordinary counter tenor Philippe Jaroussky filmed in the Versailles Hall of Mirrors. This young virtuoso is accompanied by a Baroque ensemble performing on period instruments. Short of time travel, this may be the closest you can get to the experience an uppercrust  European aristocrat of the 18th century would have had listening to this kind of music. In  many Catholic countries, women were not allowed to appear on stage and so young boys of talent  were often castrated in order to preserve their high voices and they would appear on stage in the heroine's roles instead. Philippe is one of a growing number of men in o the 21st century who are reviving the Baroque art of male  singing in the higher ranges- this time, thankfully, without surgery. Marvel at his phrasing and control- it is simply superb.

The clip below is from Handel's oratorio Apollo e Dafne. Notice the dominance of string instruments, the easy, moderate tempo and the sunny major key, all characteristics of the Apollonian ethos.

Below is a climactic aria from Handel's opera "Semele", sung by  Rosemary Joshua in a staging by the English National Opera.  This is the scene in which Dionysus's (second) mother is  realizing she has made an enormous mistake in insisting upon seeing Zeus in his full glory and she is about to get incinerated. Notice how the more brooding  tempo, ominous minor key and the "start and stop" rhythmic quality support the tragedy- all are hallmarks of  Dionysian-style music, which avoids moderation in favor of emotional and tempo extremities.

Notice the masterful way that the  Apollonian orchestra holds the architectural structure of regularity, moderation and predictability while the (intoxicated)violin careens wildly and unpredictably with tempo extremes , racing up and down from the heights  to the depths and imbuing the music with passion and pathos. All four of these concerti are based on sonnets which might actually have been composed by Vivaldi himself.  Notice how deftly he conveys the scenes in the music- a true marvel that is utterly missed when orchestras do not print or project the lyrics.

Autumn – Concerto in F MajorAllegro
The peasant celebrates with song and dance the harvest safely gathered in.
The cup of Bacchus flows freely, and many find their relief in deep slumber.

Adagio molto
The singing and the dancing die away
as cooling breezes fan the pleasant air,
inviting all to sleep
without a care.

Allegro
The hunters emerge at dawn,
ready for the chase,
with horns and dogs and cries.
Their quarry flees while they give chase.
Terrified and wounded, the prey struggles on,
but, harried, dies

Below is the delightfully irrepressible Brandenburg Concerto No. 6, performed in an authentically small sized ensemble held together by a "basso continuo" that consists of harpsichord and a bass instrument articulating the harmonic underpinnings of the piece. Enjoy how Bach weaves together homophony (where everyone is playing the same chord structure) and polyphony (where each part has its own intertwining melodic line) and then marvel at this: Bach collected together the Brandenburg Concerti as a job application . He didn't get the position.
Below is another performance of the same piece, this one highlighted graphically so you can SEE the differences between monophony ( in rectangular blocks) and polyphony ( colorful squiggles).

Below is a clip from the riveting film "Farinelli" which depicts the life of the most famed castrato in the world. In this scene, Handel hears the extraordinary vocal prowess of this young peacock and it brings him to near fainting.
Notice  the extraordinary ornamentation and liberties taken in the return to the main theme. This is typical Baroque performance practice, in which repeats were seen as an opportunity for the performer to imprint the music with the stamp of their originality.  The lyrics of this  gorgeous aria  evoke the Dionysian themes of grief and longing for liberty: