Week One: Apostle to the Apostles

Donatello
We begin our series by turning to Mary Magdalene as she appears in the New Testament: the Gospels of Matthew, Mark, Luke and John. Contrary to the collective popular perception of a prostitute, in the Gospels she appears by name only as a  a faithful follower of Christ. She appears first  in Luke as a woman of means who funds  Jesus' ministry,   The Gospel writers all agree - in an unusual act of uniformity- that she was present  at  the crucifixion after the male disciples  fled, and  that she appeared  first at the tomb to anoint Christ's body and prepare it for burial. She is the first witness of the resurrection, and is charged with bringing the message to the other disciples.  In the Orthodox tradition, she is honored and  revered as  the "Apostle to the Apostles". 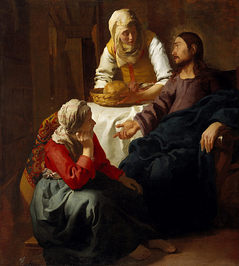 Mary, Martha and Jesus byVermeer
There are multiple Marys in the New Testament, and there has been a centuries old debate about which ones are the same woman. In this class, we will meet Mary of Bethany, a prayerful woman of deep emotion who sat at Christ's feet as his disciple. We'll explore the reasons why the two Marys have been linked together in Catholicism- and the reasons why the Eastern Orthodox Church has always believed them to be different women. We'll share the beautiful stories of a prayerful seeker lost in contemplation, the sister of Martha , the woman who foreshadows Christ's death and witnesses the miraculous revival of her brother, Lazarus. 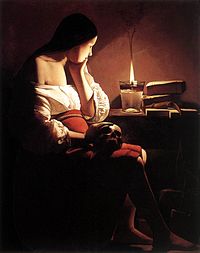 Georges de la Tour
In the sixth century, Mary of Bethany and Mary Magdalene were joined with the unnamed sinner in Luke's gospel and the local legends of a reformed prostitute, Mary of Egypt, to create a composite character representing the  image of the penitent sinner. We'll trace the social and political reasons behind Pope Gregory's sermon which, in the words of one scholar, "turned the most faithful witness and the first apostle into a whore".
As Christianity become more fearful of women and sexuality, Mary Magdalene became one of the only figures in the New Testament to embody sensuality. We'll trace how as her sins multiplied, devotion to her cult increased until she became one of the most prominent saints of medieval Europe- for  reasons that had nothing to do with scriptures themselves.

Week Four: The Golden Legend and the Caves of France 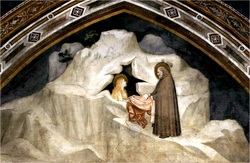 Magdalene in the Cave of La Baume, Giotto
We'll begin this class with the rousing  twelfth century Golden Legend  , which tells the story of how Mary Magdalene arrived on the shores of southern France in a rudderless boat after the crucifixion, preaching and teaching Christianity throughout Provence before retiring to a life as a hermit in the caves of La Baume. We'll turn next to the influence of Mary Magdalene on the Troubadours and  the tragic history of the  Albigensian Crusade , when most of the Cathars were exterminated  in part for their heretical beliefs in Mary Magdalene while a few fled deeply into the mountains of the Dordogne.

Week 5: The Gnostic Magdalene and the Nag Hammadi Scriptures 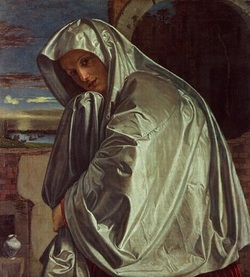 In 1945, a treasure trove of ancient manuscripts was discovered in a cave in Nag Hammadi, Egypt. This collection of gospels, actively suppressed by Rome in the fourth century, depicts the teachings of Jesus in  ways that are sometimes familiar  and ways that are sometimes very different  and challenging to our notions of Christianity. The emphasis is on personal gnosis, or inner knowledge, and repeatedly the disciple who is depicted as best understanding Jesus' message and meaning is Mary Magdalene . She is called the "Woman Who Knows All" , the embodiment of wisdom or Sophia. We'll explore the Gospel of Thomas, the Gospel of Philip,  Pistis Sophia  and the Dialogue of the Savior and trace the underlying tensions between the disciples around the questions of  the role of women in spiritual leadership.

Week Six: Fully Human: Magdalene as A Guide for Our Times

Killmore Church, Scotland
Magdalene is described in several Gnostic texts as "Anthropos"- a fully realized human being. In our final class, we will turn to  the emergence of Mary  Magdalene as an archetypal figure who reconciles all seeming paradoxes, holding the tension of the opposites and pointing the way in our own time to the integration of the sacred and secular. We'll discuss the controversy surrounding the so-called "Gospel of Jesus' Wife", currently being studied  by Professor Karen King at Harvard University and conclude with a preview of Mark Adamo's emotionally charged new opera, The Gospel of Mary Magdalene, which envisions a powerful, compassionate and passionately dynamic relationship between Jesus and Mary Magdalene.

The Gospel of Mary Magdalene 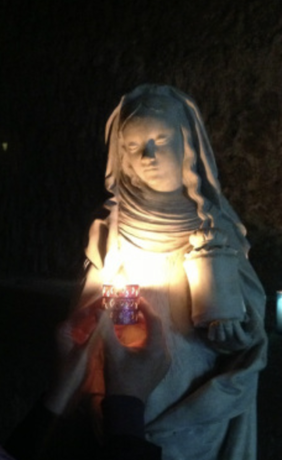 Mary Magdalene by Robert Lentz
Discovered at the end of the 19th century in Egypt, this document  is attributed to Mary Magdalene.  Three fragments of the text have been found, indicating that is was widely circulated in the  ancient world at one point. The surviving versions, written in both Greek and Coptic, are  dated from the second century. There is debate among Biblical scholars as to when the text was actually written,  but it is clearly a very early document, and could possibly even have been written before  the Gospels of  Matthew, Mark, Luke or John.  In it, Mary Magdalene is depicted as the spiritual leader of all the disciples who are still reeling in confusion and loss over  Jesus' death. She strengthens their courage, imparts her  mystic vision and reveals secret teachings that Jesus gave her. The emphasis in her words is on inner perception and connecting to the Sacred through one's imagination.  Harvard professor Karen King writes that “both the content and the text’s structure lead the reader inward toward the identity, power and freedom of the true self, the soul set free from the Powers of Matter and the fear of death.”